Fall has made it’s presence known in the swirling mass of leaves and almost cold nights. The rabbits are feasting on the crab apple tree leaves that have turned brown and crispy, like a bunny potato chip. They inhale whatever late season greens I can find; dandelions, the last plantain, grasses gone to seed, and the cover crop of oat grass that loves this cool weather. All this bounty depends on the dirt we live on. What have we done to it?

Accounts from the pioneers who came to the Firelands and the Western Reserve repeatedly said that “a squirrel could run from state edge to state edge without ever touching the ground.” Ohio had a thick ancient forest that was known for irretrievably losing unwary travelers just a few steps off the main trails or just beyond your cabin clearing. The settlers started clearing the forests to build houses, barns, and start fields to feed their families. They found the dirt rich and dark, which grew a bounty of food. More people came, clearing the woods, making room for taverns, stately homes, orchards, and more fields. Cuyahoga County had many lumber mills in the 19th and early 20th century . Years passed and slowly the giant oaks, ash, and beeches came down and edge of the woods crept back until now you see them huddling in strips between houses or protected in parks.

Have you noticed the difference in your dirt? My family has been in northern Ohio since 1806 and most of them were farmers. Nowadays farmers and home gardeners pour both chemical and organic fertilizers into the soil, trying to stimulate that verdant growth which our great-grandparents talked about.  My grandmother would tell the story of how the doctor would come to their house and she and her siblings would run to the woods and hide so they didn’t have to get shots. My mom’s generation still reminice about playing in the near-derelict barns of their grandparents, built from the bones of ancient Ohio trees, and the small wooded tracts that were all that was left on the property. Where are those woods today? I’m sure you’ll find a housing development or a business park where those leafy sentinels stood.

Recently I read a history book about the beginning of the city of Lakewood, Ohio, and in it, it talked about Dr. Jared Kirtland who was a famous naturalist. He studied the soil of Lakewood and finding it made of leaf humus, urged his neighbors to give up growing grains but to grow fruit trees instead. Lakewood and Rockport (modern day Kamms Corners) became famous around the country for the bounty of the variety of fruits grown here. Slowly, progress paved over farms and trees were cut down to build houses that city workers live in. Cleveland was known as “The Forest City” for the amounts of trees that abided here, and Forest City Industries was named after that. More houses, more urban spread, less trees.

It’s November 2016. I ponder and think and ruminate on what I read. Sara Stein’s “Noah’s Garden: Restoring the Ecology of Our Own Backyards” is a resident on my book shelf, a book that takes a deep look into what happened to her plot of land in Pound Ridge, NY from the time it was settled in the 1700s to the 1990s. One of the many points I took to heart was  we need to feed our dirt.

Ohio is not the mountainous New York of Mrs. Stein’s ecology. I struggle with growing flowers and food for the rabbits in the clay churned soil of Cleveland. As I look over my dry, cracked, grey toned garden dirt, I think of the settler’s accounts of the trees and their squirrel inhabitants, of Mr. Kirtland’s scientific determination that fruit trees would grow well here, of my grandmother hiding in the woods, my own childhood growing up deep in the shaded woods of Bradley Woods Park watching the cycle of woods life, watching in these last few years as the city cuts down the last of our elderly trees and I have finally reached an obvious conclusion: my garden needs trees.

Ohio was covered in trees. Billions and billions and billions of leaves have been laid upon Lake Erie’s clay edged land for eons and they rotted into leaf humus. My native soil bacteria is for leaf humus. Trees, yes fruit trees, thrive in this leaf humus ecology, which will still support grasses and shrubs. But it needs leaves and moisture to feed it, and leaf humus is outstanding in retaining water. I remember as a kid in the spring the super nasty, soggy, heavy wet pockets of leaves that we’d missed raking and putting on the leaf pile in the woods during the fall. Water would run out of those clods, even in the high summer. Milipedes, centipedes, nightcrawlers, potato bugs, and all sorts of fungus thrived in that humus.

The short sighted plan of people took away the biological machines, our trees, that fed and nourished the environment of our dirt, not realizing how vital they were. That dirt, having been fed for countless eons, was able to provide for several hundred years a bounty of food, all the while city planners pushed the trees to a reduced state. Is it no wonder I struggle with my garden? To the best of my knowlege my dirt has barely been fed since 1948, when our house was built. The trees that do remain on our treelawns keep trying to feed the dirt (and themselves) but we keep raking leaves up and stuffing them in bags for the garbage man to remove because they are ‘unsightly’. We are throwing away the food Ohio dirt needs, which leaves us with whimpering gardens and a paucity of native bacteria. We are starving our neighborhood soils and don’t even realize it.

Today I ran the lawnmower. It’s a bagging mower and I set the deck on high, not so much to cut the grass in mid November, but to suck up the leaves and mulch them. The bagfuls of chopped leaves I then deposited all over my front garden beds, leaving riotous colors and a fluffy contour. I have been adding fallen leaves and rabbit droppings for the last three years and the dirt has gotten much better, more brown colored and crumbly from the infusion of brown carbon. 2016 was the first year the front gardens retained moisture long-term and is the first year the seeds I scattered germinated.

For 2017 I think I will take a new piece of advice from the Ancient Giants that use to cover Ohio–come spring I won’t turn the soil, but let those leaves lie and decompose where they lay. I’ll just dig a few holes where necessary for my seedlings and let Ohio biology do the rest of the work for me. After all, it likes to eat too. 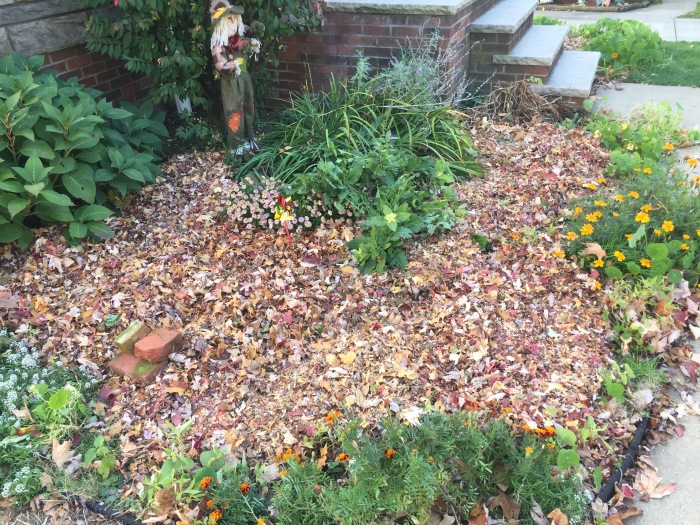 3 thoughts on “The Earth That Nourishes Us”